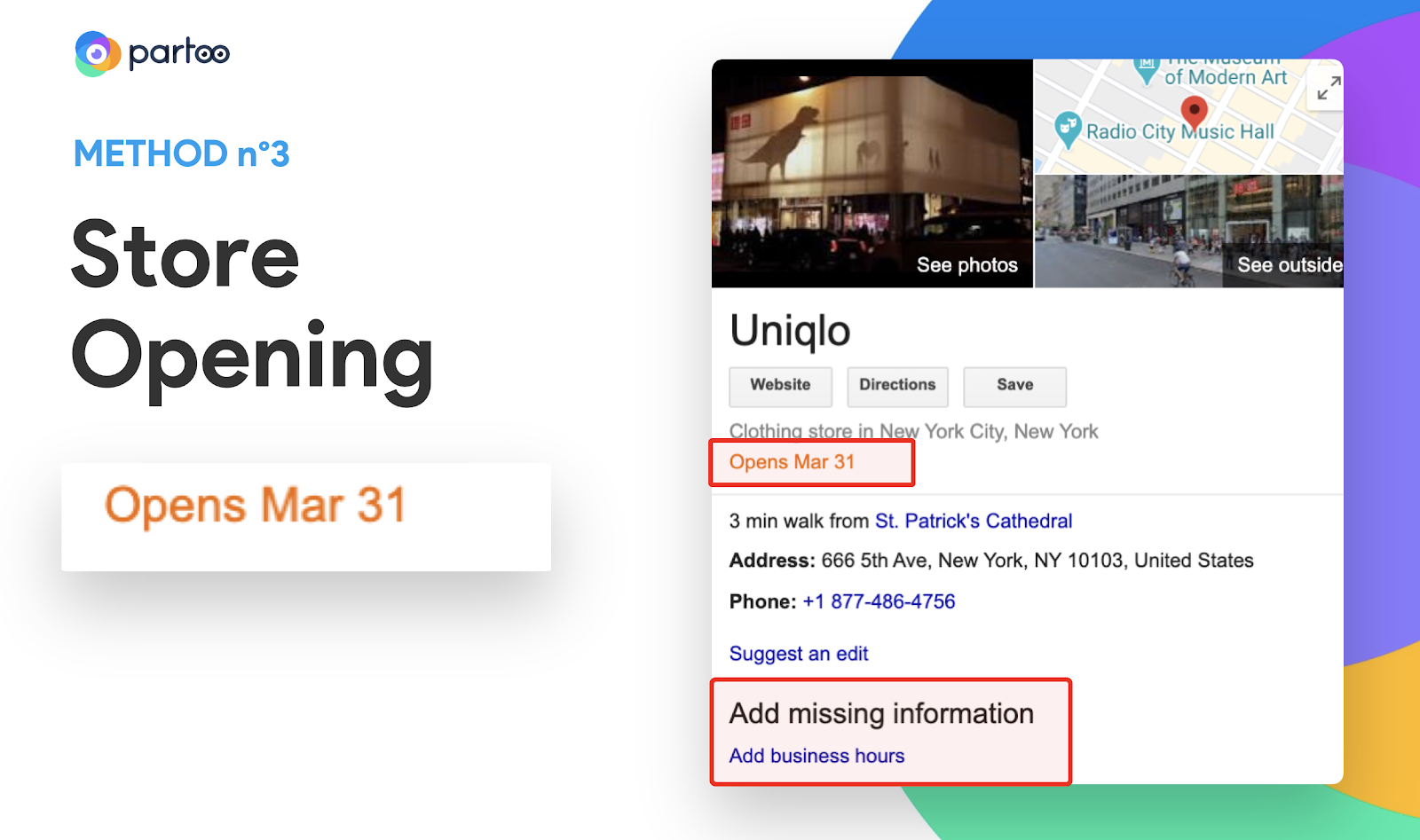 In this period of confinement or curfews, it is essential to know the right way to exceptionally modify your working hours or close your establishments.

Even though most companies don’t fall into the trap of closing their establishments permanently, it’s not easy to choose between special closing times, temporarily closed and reopening at a given date. In this article you will find advantages and disadvantages to each method as well as our recommendations!

Don’t have the time to go through everything? We would recommend you to check out option #4! 😇

1. “Permanently closed”: The worst thing to do

This is probably the worst thing to do right now. However, there are many establishments falling into this trap, as it may seem as the most simple way to handle your listing on the Google My Business interface.

3. Planning a store opening: Negative for your SEO?

Some establishments sometimes plan a grand opening event: This is the case for stores like Nike or even Abercrombie! Additionally, on their big day, the store staff has 1,000 things to do other than the planning and creation of its Google listing. Thinking about situations like this, and considering the number of customers that are anticipating the opening of their beloved store, Google has launched a feature that announces such events, making it completely public to users through Google My Business!

Several brands, such as GoSport or Uniqlo in New York have used this feature to handle the Covid-19 situation. However, it is not what we advise you to do as it is a deviation of a feature that was not intended for this situation. As such, it has some disadvantages.

This is the method officially communicated by Google to adapt to the current situation! Special closing times are used in different cases such as during construction work, during the owner’s absence or in specific cases like the one we are currently facing.

Another feature is currently visible on some Google listings like that of one of our clients UGC, the “Temporarily Closed” label!

However, this feature has some problematic behaviors that we have identified. For instance, the label “Permanently Closed” seems to have a mid-term negative impact on the listing, which is linked to a bug on Google My Business. At least, that’s what local SEO experts in the United States have indicated to us. Find more about that on this article.

If you still want to use this feature, please note that it is not available through API or GMB interface. To have your GMB listing marked “Temporarily Closed”, you need to contact Google My Business support – which is currently saturated. Google recently announced that they will make it easy for businesses to mark themselves as ‘Temporarily closed’ using Google My Business”, but it seems that the technical implementation is taking longer than expected.

Apart from this exceptional closure on Google My Business, many questions arise in these difficult times. It can be about issues in recovering your listings, duplicates that you are unable to delete or Google Posts that you want to publish to warn your customers on certain subjects (prevention, delivery, specific measures, etc).

The entire Partoo team is therefore at your disposal to answer your questions via e-mail: contact@partoo.fr.

Covid-19: How to best communicate on Google My Business

For some time now, at Partoo, we have been advising our clients on how to deal with the Covid-19 pandemic, as well as helping them by indicating that their stores are closed, especially on Google My Business (GMB).

In the exceptional circumstances due to the COVID-19 coronavirus epidemic, Partoo wishes to respond positively to the call for mobilization launched by Cédric O, Secretary of State for Digital Affairs. The idea is to contribute by offering its solution free of charge to all public hospitals. In this period of health emergency, it is vital […]