What is “Keyword stuffing” and what impact does it have on my business? 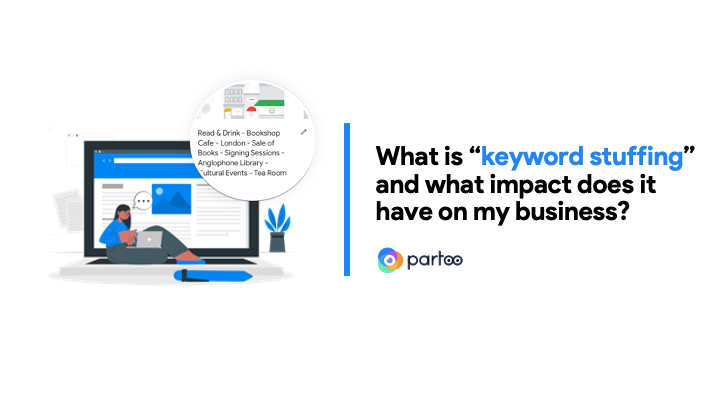 To improve referencing of a listing, information provided must be as complete and up-to-date as possible. Certain information, such as the name of the establishment, has a particularly important impact on the referencing of the listing and has led to the development of so-called “fraudulent” optimisation practices. One of the most common is keyword stuffing.

This is an effective practice for moving up in the results but it is contrary to the rules of the search engines and is increasingly punished.

What is keyword stuffing?

Keyword stuffing is the incorporation of keywords into a listing or web page to improve its ranking in search results.

In local referencing, this means, for example, adding keywords to the information in the Google listing (name of establishment, list of services, etc.). Generally, the integrated keywords are the city, the sector or the activity of the establishment.

The risks of keyword stuffing

Keyword stuffing has a negative impact on the user experience (illegible information) and is punishable by search engines as it is identified as poor quality content. This is contrary to Google’s guidelines and over the years Google has launched several updates to limit the impact of keyword stuffing:

If you do “keyword stuffing” on your business listing and Google detects it, the possible sanctions are:

Listings that use keyword stuffing are often detected as a result of a name suggestion by a user, or a report to Google (from a competitor for example). An experiment by SterlingSky shows that out of fifty reported listings, 60% received a warning, 20% were partially suspended and 20% severely suspended.

In the case of a hard suspension, there are two possible outcomes: contact Google support to ask them to make the listing accessible, which can take several months, or start from scratch by creating a new listing.

What should be done then?

Keyword stuffing is effective in the short term but risky in the medium to long term.

We therefore recommend that you avoid as much as possible the use of this and any other practice aimed at deceiving Google’s algorithm.

As always, we are available to advise you on this subject and on the visibility of your establishment in general! Do not hesitate to contact us 🙂

Google, Apple, Facebook, Whatsapp and Instagram all have something in common. What is it? All these platforms have recently released their messaging solution for businesses. It seems obvious, considering that 90% of Internet users would contact businesses via messages rather than via a phone call. However, the incredible number of platforms make it difficult – […]

(Effective Date: May 15, 2022) This Partoo Privacy & Cookies Policy (this “Privacy Policy”) explains how your personal information is collected, used and disclosed by Partoo SaS,. and the Partoo affiliates listed in the “Data Controllers and Contacting Us” section below (“Partoo”, “us”, or “we”) and how we collect information through the use of cookies […]